In the Twin Cities we are blessed with a wide variety of performance art options.  Some of my favorite events are community based, like the May Day Parade.   At this end of the seasonal cycle Barebones Productions puts on its Halloween Extravaganza.  This is an evening event, outdoors in a park late in the fall in Minnesota.   For the 21st annual production Barebones presented Metamorphosoup.

In line at the entrance

This year the weather has been perfect for this kind of event.  Last night when I attended the temps were in the cool, but comfortable 50’s.  Much better than some years, but still nice to be bundled up. This year’s presentation seemed shorter than some.   There is often a theme or story associated with the production.   This year seemed more pageant than play.

The audience entered through the mouth of the great whale and found their seats on hay bales under the trees.  Actors/street performers dressed in Halloween visions of carnival characters directed people to seating and kept us engaged.   There are 5 performances with a total attendance around 8,000 people (maybe more this year due to the fine weather).  We watched the new moon setting over the trees as we waited for full dark, for the audience to settle, for the main show to begin.

Complete with puppets, aerialists, fire spinners, dancers, singers and musicians we watched the cycle of birth and death and rebirth play out before us.  This was the story of the cosmic soup, the great cauldron of creation.  This was a pageant of evolution and destruction, of limited resources and greed, and the bounty of stone soup.   There were moments of profound loss and grief and moments of awe and joy.  There was an acknowledgement of ancestors lost and of remembrance.

all things come from the sea
photo by Bonita Blumenauer

That description hardly does justice to the wonder that is the Barebones.  There were dinosaur puppets, bones perhaps not to scale, but certainly representative of the size and scope of actual dinosaurs.   The great wave of water brought the scene to the ocean filled with floating luminescent creatures lighting up the darkness.  Fire spinners dances in glorious numbers, circles and forms.  Each time they appeared the fires beneath the great cauldron seemed to glow brighter and the cauldron grew bigger and bigger.  In the end there were the ancestors, and the stars.

The plesiosaur came out after the show. This is an animated puppet on a grand scale.

Even after the presentation there is still production happening.  This is not just a play, but an event, a community ritual.  There is a beautiful Hungry Ghost Altar set up around the tree for people to spend time honoring their ancestors, beloved dead and unknown dead alike.  There is paper to leave notes and messages, candles available to light, offerings made with the great tree as witness to all that happens at its feet. 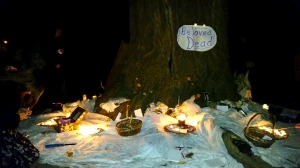 The Jack Brass Band(the Brass Messengers on other nights) played music into the night.  The brass band echoing on the wind is reminiscent of a New Orleans style funeral procession, somber on the way in but joyous and celebratory on the way out.  Sisters Camelot had hot food available for those who stayed and needed a warm-up.  There was also some merchanting, another source of funding for this amazing production.

This is one of my favorite ways to celebrate the season.  The bounty of the harvest, the acknowledgement of loss and change and transformation, and the honoring of the ancestors all tied up into a community event.   Happy Halloween!

It doesn’t help that I can be very casual about numbers.  I’m good with math, but I don’t really remember numbers well.  Every time I’ve moved (and it’s not that many times) I get my checks changed immediately, so I can LOOK whenever someone asks my address.  It takes me months!  The best thing about cell phones is that I get to keep my phone number.  I didn’t change plans until I could.

I can’t even remember how old I am.  My kids remember.  I could do the math, but if someone is asking I figure if they really want to know THEY can do the math.   I was 23 for 3 years, it was a number I could remember.  I’m bad with my kids ages too.  I don’t believe Orion just turned 26, but I’m sure he’s right.

I didn’t go into the bariatric surgery with my eyes on the numbers.  I cared about energy and mobility and health.  All of those things are noticeably improved.  I can stand longer, do more and am more comfortable.  I no longer shuffle when I walk.  I even put on a pair of heels.   I can curl up in my favorite chair.  I don’t need as many pillows in my bed.  I don’t get winded coming up the stairs.  These are the things that matter.

Still, there’s that number.  100.  It makes a difference.  It shouldn’t, but it really does.  Hitting the 100 lb weight loss mark is a milestone, like it or not.  It doesn’t matter what percentage of my weight I’ve lost, or how much I have left to go.  It’s just that number.

I’ll hit it several times, depending on where I count from.  But I suspect the impact of the milestone will only hit me this once.  So, I’ll claim it.  Let’s hear it for 100! 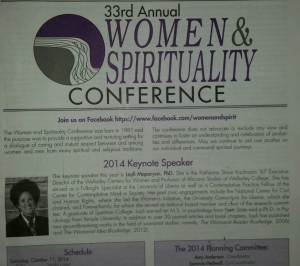 Last week was time again for the Women and Spirituality Conference at Mankato State University in Minnesota.  I’ve done quite a few blogs on this conference and my experiences at it.  (There’s a list of links at the end of this post.)  I don’t see any reason this year should be different.

I didn’t take pictures this year.  I thought about it.  I know the mantra of public speakers is “document, document, document” and still I couldn’t bring myself to dig out my cell phone and snap a reasonable shot.   Maybe it was because the fall colors were somewhat muted this year.  It’s still a beautiful drive especially along the Minnesota River valley, but it wasn’t “vibrant”.   Maybe it’s was because this years conference seemed slightly under-populated.  There just didn’t seem to be as many attendees, merchants or even energy as there has been in previous years.  Maybe (and this is the story I’m telling myself) I just wanted  to be in the moment.

For all of the underwhelming impression, it was a really good conference this year.  The keynote speaker, Layli Maparyan, was very dynamic.   She packed an impressive amount of information and hopefulness into her presentation.  She definitely set the conference off to a great start.

The prayer beads that start the workshop “Daily Practice Sucks”

An event like this provides the universe an opportunity to send me messages, and this year was no exception.  I gave my workshop Daily Practice Sucks twice, and in both sessions I was asked if I ever did workshops on making prayer beads.  This is something I’ve been kicking around, but it was nice to learn that there is a desire out there.  In fact I keep getting the “ping” that I need to be doing more with crafting and creative projects.

I am so very resistant to arts and crafts that this is a real challenge for me.  There is a phrase that suggests “leaning in” to those things that challenge you.  Apparently I’m looking at a year of leaning in.  One of the workshop proposals I sent to Pantheacon involved a long term art project.  I took a handmade card making class at Gilda’s Club where I volunteer.  Last week my GOM girls had me playing with clay.  Just in case I missed the point, as I was packing for the weekend my prayer beads broke and I had to restring them.

Perhaps I can attribute that “dullness” I experienced as simply my resistance to what the universe is offering me.  I can choose to lean in and stretch my own boundaries or I can live in a “toned down” vision of what’s possible.  I’ll even admit that there is some appeal to calm, predictable, and low-key but I know in my heart there is only one choice I can make.    I guess I’ll roll up my sleeves and try my hand at some crafts.

I often start the autumn decorating in August, with the first harvest.  Then add and subtract all the way through Thanksgiving.  This year though it’s taken me until now to start thinking about Halloween decorating.  It’s the neighbors that got me started.  All those walks around the block are becoming inspirational.

I was surprised at how few actual Halloween decorations I could find.  I suspect several of the things I know I’ve got somewhere are too practical to be tucked away.  I know I have a few serving platters and baskets.  The gourds and corn may have all been tossed.  Over the years they can get a little nasty in the damp basement.

What I did find was my Brujeria.   I picked her up in Mazatlan when I was there with Orion for his High School graduation trip.  She’s too delicate to ship well.  (I’ve been glueing bits back on ever since.)  But I loved her attitude.  Halloween, Samhein, Dios de los Muertos all come together for me in this little witch.

I’ve always enjoyed the fall.  The cooler weather appeals to me.  In Minnesota fall is much more dependable a season than spring.  Denial of winter is easy as long as the snow doesn’t get too thick on the ground.  I’ve trick-or-treated in snow pants and boots, but most of the time those early snows don’t linger.

On the other side of the year it doesn’t seem like spring until something green is poking out from the ground.  That doesn’t often happen when there’s still melting snow.  In Minnesota spring can last a day or a week, but fall can go on for months September-October-November.  Sometimes it feels like fall in August, but it’s still summer at least until Labor Day, regardless of the weather.

It’s a good time of the year for fires in the fireplace, or even a bonfire outdoors.  It’s all about being dressed in layers.  Sweaters, woolens, deep pockets and hats but mostly sweaters.  It’s not unusual to see a sweater with shorts, or a wool coat and shoes – no socks.  There are plenty of people here who will hang on to wearing sandals until the snow really flies.

At this time of year it’s easy to be aware of the presence of our ancestors.  I think about the fishing and hunting this time of year as a way to gather enough to make it through the winter.  I think about my own ancestors wishing for a little more warm to get in the crops and a little more cold to make refrigeration possible.  When I pick up sticks in the yard I’m planning kindling for when the woodpile is buried under the snow.

The Brujeria thinks like this at all times, in all seasons.  She lives in harmony with the world around her, even when she is at odds with the culture.  She gathers her ingredients when the time is right and uses them at her own discretion as the need arises.  She feels the changing of the seasons in her bones and readies herself and her clients for whatever she foresees.

This year I’m hoping she’ll help me with that!