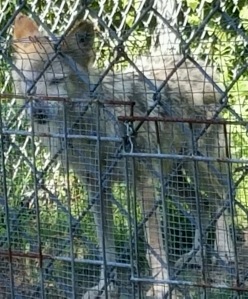 This Mexican Wolf is an endangered species

Part of the theme for my women’s group this year is wildlife.  Some of the women are exploring totemic relationships, some are looking at environment and biosphere, some are looking at social interactions within the species.  It’s all been interesting and there have been lots of field trips – including the one to visit my parents.

This weekend we took another trip, a little closer to town.  We went to the Wildlife Science Center just north of the Twin Cities.  We arranged for a private tour so we got to spend a lot of time talking about the animals. 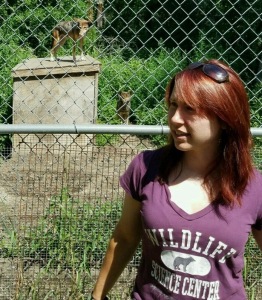 The Wildlife Science Center specializes in canids.  They have several different species of wolves, several of them endangered.  They have served as a research center and training area for wolf behavior, conservation, and preservation.  They have “rescued” many of their animals from closing zoos and from people who thought they’d make good pets.

Because they focus on canid behavior, visitors can bring their dogs (leashed and vaccinated).  We didn’t bring any of ours along, but heard a lot from our tour guide about why this is helpful.  Most of the animals here are hard-wired to protect their territories from other canids.  In the enclosures they become accustomed to the other wolves around them and the territory lines are rarely challenged.  However, visiting dogs provide the same stimulus of challenging a territory. 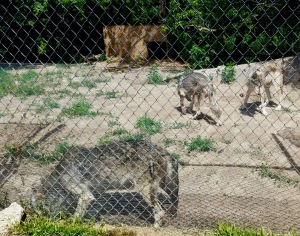 There are other animals that have made their way to the Wildlife Science Center as  well.  Mittens the cougar will stalk the smaller dogs that come to visit.  So will the coyotes.  We were told that occasionally a goose (or other local animal) will make it’s way into a pen.  The ensuing interactions are also fascinating and educational. 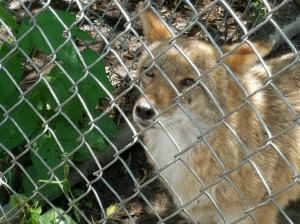 This coyote came to the center from a university. Some student thought it would make a good dorm room pet!

Unfortunately the DNR lease has run out and the Wildlife Center can no longer stay there.  They have land and have started developing the infrastructure to move the animals.  The new space is MUCH larger.  There will be bigger enclosures and more modern facilities.  But this isn’t a small project.  The Wildlife Science Center is currently running a Move The Pack fundraising campaign and hopes to be able to open the new facility sometime in the spring of 2017.

We had a wonderful day.  It was fascinating to see how different the different species of wolves are, and yet how very similar to the dogs we know.

The animals mostly came out to see us, although it was still nap-time for the black bears so I didn’t get good photos there.  I highly recommend this facility for families, schools, dog lovers, or anyone interested in wildlife management. 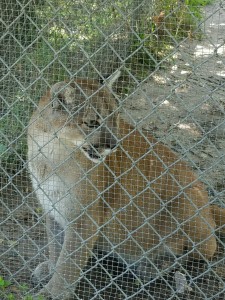 “Mittens” – pictured here, and Pandora are representatives of a wildcat that ranges across the North American Continent

Bobcats, one raised as a housecat the other an orphan, exhibit very different behaviors when the keepers enter the enclosure.