Crossing the Mississippi at the corner of MN,WI,and IA

In Frazer’s The Golden Bough there is some exploration of the notion of the sacred king.  There are a number of components to this idea.  One is in the Divine right of kings to rule, and subsequently that they are the representatives of the Divine on Earth.  Then there is the belief that the kings are connected to the land.  As the king succeeds the land thrives, as the king fails or falls ill the land is depleted.  In a system that holds these principles to be true, the logical outcome is to demand the sacrifice of the king to relieve a drought or natural disaster.  Frazer took that philosophy and connected it to the agricultural cycle of reaping and sowing – death and rebirth.

I came back from spending a long weekend on the land to see my Facebook full of images of our Secretary of the Interior assessing National Parkland for its value to sell to industry for development.  Moving from visiting a Prairie reclamation project at the height of success to a clearly out of control consume and profit narrative was disheartening to say the least.

On the way home I noticed the corn was starting to come in from the fields.  The corn harvest is the mark for me of the Lammas celebration, John Barley Corn is dead, long live John Barley Corn.  This is the representation in Wicca of the sacred king mythology.  The grain God is sacrificed to feed the people.

It’s been difficult to sort out the sacred from the political.  Police are shooting people, healthcare continues to be threatened in spite of an overwhelming majority who clearly want to have coverage, and our sacred lands are being sold out from under us – again and still.

I see spiritual representatives from around the world being dismissed by Big Oil at Standing Rock.  I see a spiritual leader in my hometown, trying to help a neighbor in distress, being shot by police.  I see places that I’ve stood in awe of nature being looked upon as a feast for mining, logging and manufacturing industries.

Included in the sacrificial king mythology is the Arthurian story of the Fisher King.  This is part of the grail quest.  The sacred chalice, that has magical qualities including the ability to heal, is apparently in the possession of the Fisher King.  The king has a grievous wound and is failing, as is his land.  Somehow he doesn’t have the wisdom, moral integrity, or desire/belief to use the grail.  Percival, who was raised by a single mother in the forest away from the society of men, sees the solution but fails (out of politeness?) to ask the question that will heal everything. 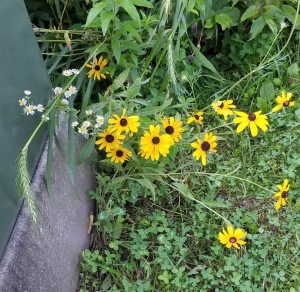 “LIfe will find a way”

We need to ask the questions.  We need to keep asking until we get answers that go beyond pats on the head and being told we can’t possibly understand.  Why can’t we get along?  Why does the notion of “equal rights” always seem to have an “except” clause?  When and how much is enough?  Who has the vision for our future?  Does that vision include life, liberty and the pursuit of happiness? For everyone?

Previous blogs about the holiday season:

Corn on the Cob