The ice is making pretty patterns on the driveway. Not sure I’d want to walk on it.

We’re under a winter storm warning today.  The prediction is for rain Sunday night, turning to ice and followed by up to another 6″ of snow in the afternoon.   As I watched the Oscars, the screen was a constantly updating running list of all of the school closings in the state.

It is not that unusual to see the rural area schools being closed when there is a winter storm warning.  Roads in those areas get blocked.  Transportation is unpredictable.  But when the city schools are closing the night before an afternoon snowstorm I have to wonder what’s going on.

Historically the Twin Cities don’t shut down.  The airport stays open until everyone else in the country is closed and there’s nowhere to send our planes (or no new planes coming in).  The plows run, salt is distributed and everyone (certainly by March) is accustomed to winter driving conditions.

But we live in a new era.  City budgets for snow removal and maintenance run low by the end of the season.  Liability is an issue for traffic control issuing tickets for badly parked cars late at night.  Young students of low income families stand at the bus stop under dressed for the weather.  Parents need notice to make plans. 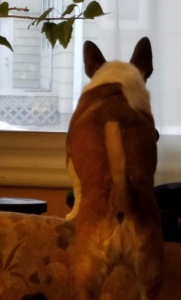 Minnie is watching for the snow. It’s a grey day, but no snow yet.

When I was in school it was assumed there would be a parent (let’s face it, a Mom) waiting at home if schools were released early.  That’s no longer the case, and latchkeying a grade schooler is frowned upon.  Schools can’t be sending children home if there is no one there to let them in.  So an afternoon snowstorm becomes a crap shoot.

Do you hope that the weather holds until everyone is on the buses and on their way, or do you close the schools the night before?   Given the length and severity of the storm prediction I can see why most of the school districts in the state seemed to make the choice they did.

This morning I get up and think, snow day I’m going to have to shovel the driveway.  I wonder if the buses are going to be running for Orion and I’m pretty sure they will be late.  Then I look out.  Nothing is coming down.  There’s a little ice in the drive, but no snow to be seen.  It’s a snow day and so far no snow.

It’s actually blowing a lot and of course there is ice underneath. The pm commute promises to be treacherous.

Update:  By 4pm it finally started snowing.  If we still get the amounts predicted maybe they should have made the snow day tomorrow.  Stay warm and drive safe.

Posted on March 5, 2018, in Uncategorized. Bookmark the permalink. 1 Comment.