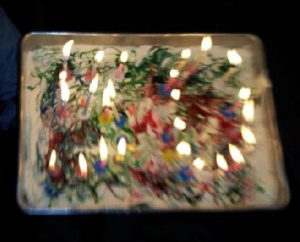 Can you see it says 50? My sister asked for “tie-dye frosting” What a brat!

I don’t know why the 50th birthday is such a big deal, but it is.  There is something about a woman turning 50 that gives permission.  After 50, what other people might think doesn’t matter so much anymore.  After 50 somehow there is an authority of age that didn’t exist before.  Maybe it’s recognizing mortality (I don’t think so) but hitting 50 is like getting permission to be whoever you want to be.  I know I couldn’t have written my book, Manifest Divinity, until after I was 50. 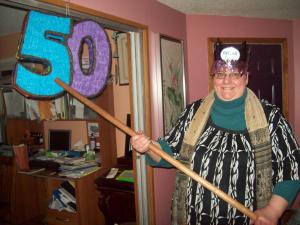 Eventually Karina came through on my 50th, and she’ll never let me forget it!

I was very clear from my 49th birthday on what I wanted and expected for my 50th birthday.  My poor daughter still complains about how horrible I was when it came and went without any dramatic recognition.  Sure I got to go out to dinner with the kids, but it was just us.  She told me I wouldn’t really have enjoyed a birthday party anyway.   3 weeks (and a lot of sighing) afterwards the surprise party she’d planned finally came together.  I was defiantly surprised!

Along with Thanksgiving, last week was my sister’s 50th birthday.  She too had announced a year ago this was a big deal and she intended to celebrate in a big way.  As we got closer to the date her life seemed to collapse in on her.  She’s spent the last month with concerns about her S.O.’s health.  It took him out of the planning loop and of course she put off everything too, making sure he was going to be okay. 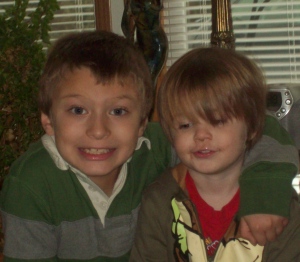 “Cousins” two of my sisters grandchildren

Her original intention was to have a party with her friends the weekend before Thanksgiving.  That would have been fine, but her kids were coming up for Thanksgiving and couldn’t get away twice.  My sister is a Grandma, and that’s a big part about what being 50 means to her.  Without the kids there was no point in the party.  It got canceled and she started referring to her “fxxxing fiftieth birthday party”.

When the family got together for Thanksgiving it was announced that we’d all go over to her house for lunch and the “fxxxing fiftieth birthday party” on Saturday.  She’d let her friends know they could come over and her S.O. would make a big batch of pho  (Vietnamese soup.)  There was some grumbling about crab legs, which is what she really wanted.  “Everyone else gets crab legs and I get turkey dinner.”  “There is apparently a rule that there can’t be crab legs for just one.”  In spite of that things were looking up. 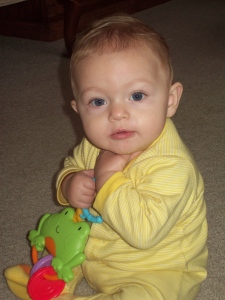 Saturday morning came and we got a phone call.  The water pump had died.  There was no water, there was no party.  Pretty much this was the end of the world.  I knew that feeling!  I felt the same way when my 50th birthday came and went.  Mom said, “Come over, we’ll have the party here.”  There was some reference to pulling shrimp out of the freezer.  I may have mentioned at one time or another that my mother keeps several freezers full of ‘just in case’.  She probably did have enough shrimp to feed whoever showed up.

Everyone arrived before my sister and her S.O..  Mom organized us to shout “SURPRISE” and sing Happy Birthday as my sister came in the door.  It set the tone for the day.  The ‘boys’ (the S.O., the son and the family friend) drove the 1/2 hour to Brainerd and back because at this point we all agreed my sister deserved her crab legs.  My niece baked the cake, my Mom pulled out the shrimp the boys took several phone calls about “a few more things to pick up while you’re down there.”  The wine was opened and the women sat around the table being crones. 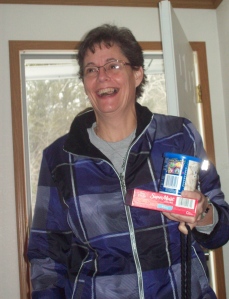 SURPRISE!!! (The cake mix and frosting were her birthday present from my Mom, their annual tradition)

When the ‘boys’ got back they not only managed to get everything on the list and then some.  They brought enough king crab legs and lobster tails to feed the crowd.  Not only that but the shrimp still came out of the freezer and my Mom made her infamous cocktail sauce.  The tears came again, this time because everything really did turn out perfect.

50 is a big deal.  It’s definitely worth acknowledging in style.  Happy Birthday Sis! 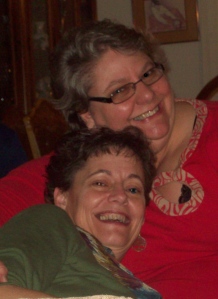