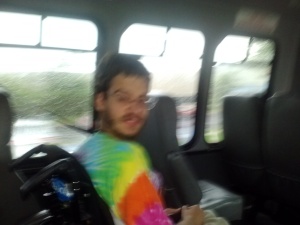 Riding Metro Mobility in the early morning rain. The only way to get us to an appointment without me lifting the chair!

It has been a busy week, which is kind of nice.  We’ve had medical appointments, adventures, and a day in the park.  I’d say it’s been ups and downs, but actually it’s been mostly ups.  Sure the challenges have been there.  I’m still not putting the wheelchair into the car so logistics are complicated.  But all the potential roadblocks were addressed and things continue to move forward.

The needles are painful, but it’s fun to tease Orion about his “wrinkle-free” legs.

It really was a week of medical.  All of my standard appointments, plus Orion got his quarterly botox shots (to help with the spastic tone in his legs) and I had another CT following up my ER visit a few weeks ago.  That’s what I thought this blog was going to be about at the beginning of last week.  Then I started having fun.

Girls night out! We were the “guests”. The friend with the tickets took the photo.

A friend got tickets to a concert by the Cactus Blossoms and invited me and another friend to join her.  Girls night out and fun country music, why not?  We had a grand time.  Even the opening act was delightful.   Andru Bemis proved to be an impressive musician and entertainer.  I didn’t get up and dance, but by the end of the concert I was on my feet rocking to the music.  Nice to be able to do that again!

The day in the park was for Pagan Pride.  Our community has been doing a Pride event for a long time.  In the past few years Pride has presented itself in a very public way at Minnehaha Falls Park.  It’s nice to be out under the oak trees, but it’s also nice to have some visibility in the larger community.

When Pagan Pride first started it was indoors at a closed school. Now it’s out doors and very public. Times have changed.

There are vendors, public rituals, music and dance performances and a lot of chatting with old friends.  Members of the Reclaiming community set up a labyrinth and other groups have booths promoting festivals and local events.  It’s a large community so there’s always something going on.

A beautiful day to be in the park

It was a beautiful day to be outside.  In fact it was a beautiful weekend, cool but warm in the sunshine.  I even got to have dinner out Sunday with another group of friends.  A side order of humus should keep me in lunches for a few more days.  “Small portions”  has taken on a whole new meaning, but I’m feeling good and really enjoying being out and about.