When was the last time you got a busy signal calling someone on the phone?  I know people who’ve never heard one.   I recall one time my daughter handing me the phone asking, “What’s  wrong?”

Voice mail has made the busy signal obsolete.  Most business will give you the voice message “all of our lines are busy” rather than a busy signal and some cell phone providers do the same.My parents are hold-outs.  They refuse to put in call waiting.  If they are talking to someone they are busy and don’t want to be interrupted (especially not by solicitors).  They find it rude to put someone on hold to check another call.  I often get a busy signal.

I expect that at particular times.  My Mother makes weekly phone calls to some of her friends and relatives.   I know I won’t reach her during those times.  I also know that a birthday or special occasion (like Mother’s Day) will make it nearly impossible to get though.  “Just calling to say Happy Birthday.” takes most folks at least 20 minutes where my Mother is concerned.

Maybe that’s where I get it from.  As a teenager the phone was regularly attached to my ear.  I often ran the cord under the basement door and sat on the top step for some privacy.  Just the idea of a phone I could carry with me wherever I went made me giddy.  You’d think I would be at the top of the line for the next, newest, best.

You would  be wrong.  I went into Best Buy in the late 1990’s looking for a new “portable phone”.  Not a cell phone, but one that didn’t have a cord attached.  I said I was replacing an old phone and really needed to be able to take this one with me out into the garden.  The very young salesperson immediately assumed that the reason I needed to replace the phone was because I was gardening and not cleaning the phone properly.  He tried to up-sell me a wipe for the phone.  I said no, the phone I was replacing was a dial phone.  He looked at me like I’d stopped speaking English. 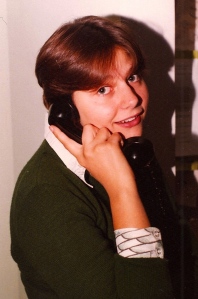 “You mean you press the buttons to dial?”

“No a rotary dial phone.”   I made the motion in the air.  Apparently I’d stepped out of a time machine.  His recovery?

“Yes, you really do need a new phone.”

I’ve learned to not jump up every time the phone rings.  I’ve learned to let it go to voice mail when I’m busy.  I’ve learned to send texts – although after an exchange of 3 or 4 I’m ready to just call you to complete the conversation.   I’ll even use the bluetooth built into the car.

None of that changes my capacity for a good conversation.   There are a few people, long distance relationships, that are bound to be a long call.  My Mother and I sometimes will get into a long conversation, especially if there is drama in the family.   Apparently I come by it honestly, but I can have that 5 hour conversation.  I don’t do it very often, but sometimes I just get to talking.

That’s why the blog is late.  I took a Monday morning phone call and , well, got to talking……….