I’ve been neglecting my blog. 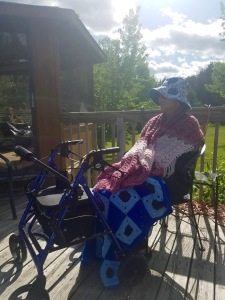 There are a multitude of reasons for this, and even more excuses.  It’s summer, no one reads blogs in the summer.  I’ve been spending a lot of time up at my parent’s and they don’t have the internet.  I keep forgetting to take pictures.

The truth is that social media is a double-edged sword.  Addictive and depressing, narrowing the information bandwidth, and allowing us to pretend we’re connecting with people, creating an illusion of a network of friends.   At the same time it really does help keeping track of our loved ones at a distance.  It can be an efficient way to organize, or spread information.  It can be a meeting ground and a place to begin new, real, relationships.

Like most things, making social media work for us rather than against us requires work.  Hitting the like button and sharing the facebook generated and suggested birthday meme isn’t really work.  Counting how many “friends” you have and playing games across a social platform doesn’t build relationships. 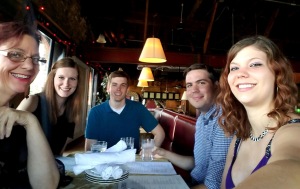 My daughter (I got to hang with her friends for her birthday) doesn’t read my blog. Ever.

I have friends who read my blog.  I know this because they’ll comment, or call and ask for follow up.  (Or message me to alert me to a gramatical error.)  When I see them they’ll be fairly up to date on what’s been going on in my life.   I have friends who don’t read my blog.  They are surprised at old news and entirely unashamed when I comment that I talked about it on my blog.  (If you really wanted to keep up……)

I also have regular readers who feel like friends.  I’ve read their blogs, and made comments.  They’ve read my blog and made comments.  We have some things in common.  We keep track.  But it’s hard to read all the blogs and maintain all the long distance, never met you in person relationships.  Bloggers come and go, getting caught up in other aspects of their lives.

Orion is really good about liking and sharing my posts. But I suspect he just reads them to see what I’m saying about him. 🙂

I am truly grateful for all the people who take the time to check in.  I am delighted by the little likes and shares, and genuinely appreciate the support.  I am thrilled and if I’m honest intimidated by the comments.  I try to check in and respond back.  Sometimes it’s overwhelming.

Thank you for taking the time to participate in my social media outpourings.  Thank you for being that oddity that is an on-line friend.  Thank you for your likes, your shares, your comments, your patience, your continuing checking in and checking up on me.

It’s been a challenging week.  I took on the role of being a supportive friend.  This week my community lost an old friend of mine to metastatic pancreatic cancer.  He went quickly, having just announced his diagnosis a month ago.

Many people in my circles were still coming to terms with his diagnosis when he passed away.  There is a lot of shock, and grief.  There is also a coming together of kindness and support as stories, memories, are shared.

This community pulled together to support my friend in his passing and to provide him with the send off he desired.  There is documentation and journaling and a promise of a resource guide.  Those who participated in that process are all posting “I want to go like this” on their Facebook pages.

I have stayed in the background, offering quiet support to those I am closer to.  I have mostly listened and acknowledged that this man’s passing is a great loss to the community at large.  I have encouraged people to check in on each other.  I have passed on the news to folks who knew this man, but are outside of our community.

I have another friend who is building a career as an entertainer.  She had a set at a comedy club as part of a contest.  So I went to the club to be supportive.  She didn’t move ahead in the contest, but I had a great time.

Laughter is often the best medicine when dealing with stress, grief, anger and other difficult emotions.  Our bodies need the release, and so do our souls.  It seemed odd being at a comedy club when so many of my friends were looking to join in toasting the life of this man.  Still, for me, it was the better choice.

I got to support another friend.  I got a night out (which my regular readers know is a big treat).  I got to laugh, which was good for me.

I grew up hearing “We only seem to get together at weddings and funerals.”  Now I’m at an age where I truly appreciate how weddings, funerals and this last weekend christenings do provide an opportunity to bring people together. 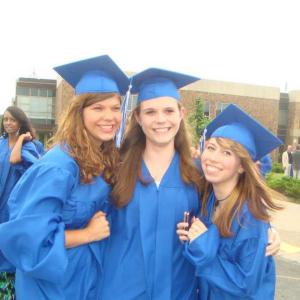 Karina and two of her “old friends”

The grandparents of one of my daughters best friends from childhood died in a fire Thanksgiving weekend.  They were also neighbors and the kids spent many summers playing in their pool.  The funeral provided many glimpses into they dynamics of “old friends.”

The girls are at an age where they are just starting to move away from the people they’ve grown up with.  They are off at school or starting their careers.   They’re no longer spending the day together and then rushing to text or talk again on the phone as soon as they are apart.  They make a point to check in over holiday weekends, “When are you coming home for winter break?”

Several of their close childhood friends took different roads.  They’ve already lost touch or “stopped speaking” to each other, which often means unfriending on Facebook.  It’s not that the gossip ring isn’t still active.  We still hear that this girl has gotten engaged or that one has a new college boyfriend.

The Mom of one of the girls my daughter is “no longer speaking to” said, “I miss having the girls over.  At my new apartment I have never found rock hard marshmallows under the cushions.”  My daughter said it was really nice to see her friend’s Mom and that she would have been happy to just smile and wave at the friend.  But she also noted that having her friend come over and chat was almost like when they were kids.  “She was nice to me again.  (Probably because her boyfriend wasn’t there.)”

The grandparents who died had lived in the neighborhood over 50 years.  So has my neighbor across the street.  She was very sad.  For her this is the end of an era.  They weren’t necessarily close friends but they lived in a time when everyone knew their neighbors and counted on them.  They have been old friends.  I suppose I am too.  I’ve lived across the street for 20 years. We talk at the mailbox.  Maybe I should stop in and invite her to go for a walk. 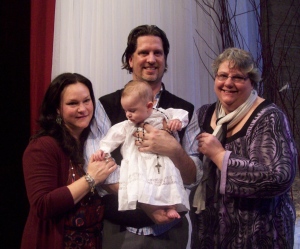 Me with the proud parents.

The christening was for the son of one of the boys I used to babysit for when I was a teen.  I did ‘summer in-home day care’ along with almost every other Friday night.  My sister would sub for me when I was busy.  The Mom was one of my mother’s best friends.  They grew up and I went off to college but would occasionally find an excuse to spend the day together.  Lost track of them when I started having kids and they went away for college.

I’ve kept in touch with the older brother over the years, although it’s definitely a long distance relationship.  I’ve reconnected fairly recently with the younger brother and his wife.  Picking up right where we left off.  Haven’t seen the Mom and her new husband in at least 20 years. 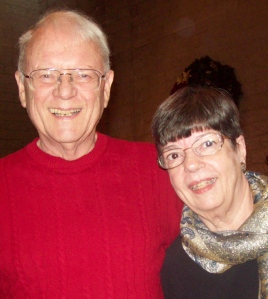 With the new baby my Mom and their Mom had an excuse to reconnect.  A congratulatory phone call was made.  Photos were sent with a letter in the mail.  There’s a lot of water under the bridge, but they’re still old friends.  Me too.  I sat with the family at the christening.  Grandma handing me her camera to take a picture introduced me as an old friend of the family and a newly published author.  We’re old friends.

The boys embrace me into the family as well.  Their partners treat me like the favorite auntie. They all brag on our old friendship and tell me they are  ever so grateful that I could attend.  I’m the one who’s grateful.  I’m lucky to have so many old friends.  I just wish I’d get to see them more often than at weddings and funerals and christenings and reunions.  🙂

I babysat two of these boys, would like to babysit the third. The fourth is a new friend who I hope will become an old friend.