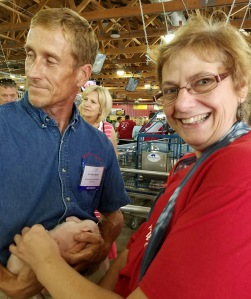 new born babies at the fair

So you haven’t seen a post in awhile and this one is coming in late.  It’s all (well maybe not all,  but a lot!) because of internet woes.   My internet went out before Labor Day.  So I couldn’t post about my trip to the fair.  They worked all week on the lines in the neighborhood and got it back up and running.

By that point I was on my way out the door and up north to visit my parents over Labor Day.   I would have written about hanging out with Rick Nolan at the parade and attending the Union Labor Day Picnic, but my folks have never had the internet.  No matter how much we whine, they never will.

That’s alright.  I should get Labor Day off anyway.  Besides Pagan Pride was this weekend.  Except I had a nasty sinus headache and so we didn’t go, despite perfect weather.   Late in the afternoon I felt enough better to mow the lawn (can’t blame the internet on that, but it’s been put off for just as long).  Of course that set off the sinuses once more. 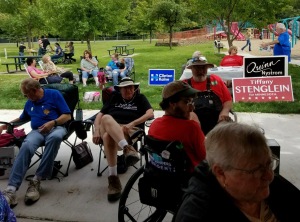 Orion joins the “old boys” at the Union picnic

It seems it’s always something.  Orion and I are sitting at the coffee shop while I write this.  My least favorite place to write.  He’s struggling with the lighting.  His vision impairment makes that a significant factor in his computer usage.

I guess if it’s not one thing it’s another.   I just need to keep working with the cards I’m dealt.  They won’t be out to even try and fix the internet until Friday.  Cross your fingers for a blog post next week! 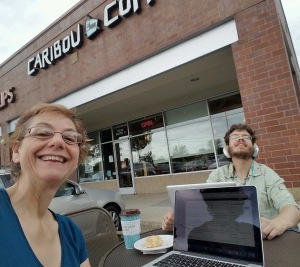 I posted my first blog on July 26 2011.  That makes this the one year anniversary week for the blog!  Yea!!!   I haven’t acquired thousands of rapt followers, a long list of blogging awards or international acclaim.  But then, that isn’t why I started blogging in the first place.

My first post was under 400 words.  (I average somewhere in the 500 range.)  It’s a very optimistic little ditty about Spirituality and daily living.  Well this blog has certainly been that, and much more.  I think what I envisioned a year ago was some sort of little weekly sermonette on very grand topics of spirituality and spiritual practice.  I’m SO glad that’s NOT what this has become.

Instead this blog has been an exercise in opening.  I’ve had to learn to express myself in an honest and sometimes very vulnerable way.  Hopefully doing that while still being (at least marginally) entertaining and readable.

In the last year I’ve covered a huge range of topics from very personal to political (in the sense of civil rights) and thrown a good chunk of Spirituality in there to boot.  I’ve blogged about the things that have touched my heart.   This hasn’t been a journal in any sense, but it has been an exercise in focusing on where I am in the moment.  Occasionally it’s even been a plug for the work I’m doing with writing a book and presenting workshops on Spiritual practice.

What I’ve found it that you can develop real friendships on the internet.  I’ve found that I feel incredibly supported by my friends who follow my blog and especially by those who write encouraging comments.  I have found that some of the hardest things to share are the most important.  I’ve found that speaking from the heart is the only way to truly have an impact on others.

So on the anniversary of my blog I will write another very short little post.  This time rather than visions of grander I offer my humble thank you.  Thank you, to all my dear and treasured readers for finding and following my journey.  May we all continue to grow and thrive in all our endeavors in the coming year.