I just finished reading “The Chimps of Fauna Sanctuary” by Andrew Westoll.  I read a lot and I read a wide variety of stuff.  I don’t even remember why I put this book on my library list.  I’m glad I did.

Non-fiction usually takes me a lot longer to read than fiction.  It’s harder to find a chunk of time when I know I’m actually going to need to focus on what I’m reading and think about it.  I usually do get overloaded with non-fiction and need to put the book down and think about what I’ve read.  I breezed through this one.

Not to say that the material that’s covered is easy.  Andrew Westoll talks a lot about the way Chimpanzee’s have been used for medical research in this country.  He acknowledges that the Chimps in the sanctuary are, by any wild Chimp standard, insane.  He describes in detail the kind of acting out, depression and self mutilation these Great Apes are capable of.  But he is essentially writing a memoir.  The intimacy of his experiences interwoven with the facts and history of the Sanctuary and the personal stories of each of the Chimps that are housed there makes this book a story rather than a text.

It gave me a lot to think about.  I knew of course that animals of all kinds are used in medical research.  In my naivety I believed that they were generally treated humanely.  I drank the drug companies’ kool-aid when they said that research on Apes made huge advances for treatment in difficult diseases, like HIV and Hepatitis.

I’m seeing a return on Facebook of posts about the way animals are treated in traditional circuses. Anyone who’s ever watched a TV show about a puppy mill can believe there are individuals out there who badly mistreat their animals.  But scientists are supposed to be smart people who know better.  I hadn’t connected the dots.

Our government actually owns a good many of the Great Apes being used in research.  The rest are owned by the drug companies.  If a scientist or a lab assistant recommends that an animal be retired from a trial for the sake of the animal, the same folks who cut deals with insurance companies to exclusively cover their crap medicine get to decide the outcome for the animal.

There are research labs, there are circuses, there are sanctuaries, and there are zoos.  I know that Como Zoo in St. Paul, MN houses Apes and I wanted to know where they came from.  I couldn’t find out on line so I spent the day at the zoo. 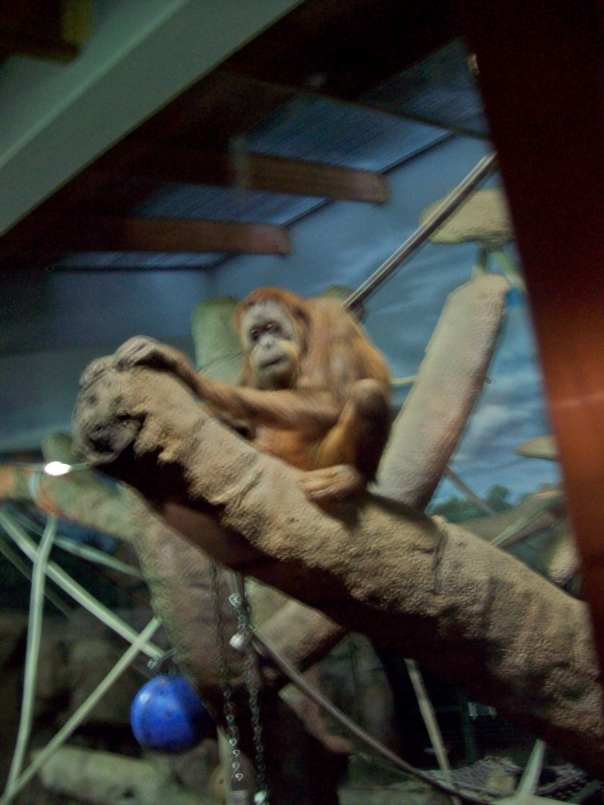 Como Zoo has 4 Orangutans and 2 lowland Gorillas.  All of them were bred in captivity.  In fact the Orangutans include 2 females and a male, 2 of whom are the parents of the 4th.  The Gorillas are both male, as family units for Gorillas tend to kick out the adolescent males into “bachelor tribes”  Since 50% of the captive bred Gorillas are male there is a need for all male housing.

Sadly, the facilities at Como are pretty sad for our genetically close brethren.  Gorillas are shy creatures and there is no room for them to hide.  Especially now that it’s too cold for them to go outside they don’t have anywhere near enough space.  I’ve been in a hospital room for 3 weeks.  You go nuts!  They’ve spent their lives in facilities like this.  It’s a great improvement on the old sterile cages (the ones the lab animals are kept in) but they’ve got a long way to go. 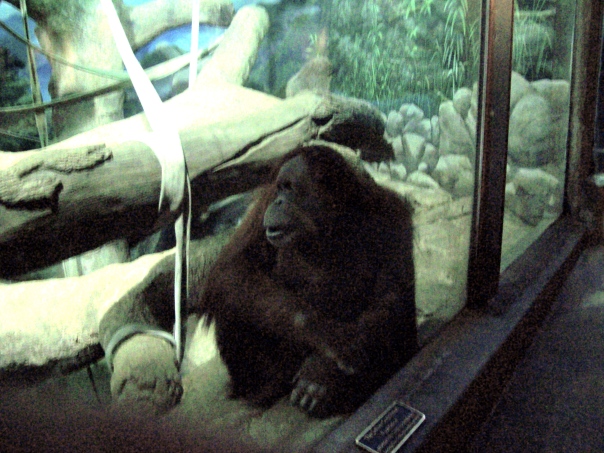 There is money for a huge upgrade to the facility at Como.  It won’t be done until spring of 2013, if everything goes according to plan.  They are hoping to have space to acquire a family grouping to promote the breeding conservation program as well as a space for a small bachelor troop.  The conservation is great, but there doesn’t seem to be a plan to reintegrate the Great Ape population into the wild.  There isn’t room there anymore either.  It’s why they are endangered in the first place.

I don’t have answers.  I’m not even sure how I feel about the ethics of the situation.  Clearly, mistreating animals in research facilities is just as bad as mistreating them anywhere else.  The zoos are trying to come around but they are limited in both funding and understanding.  Do we condemn them for not doing enough or congratulate them for the work they can do?  Are we, through our intervention, creating a new culture for Gorillas?  How dare we!?!