I’ve been thinking a lot lately about the idea of devotion.  My blogging buddy Caer over at Not All Who Wander Are Lost has just finished a little series on developing a devotional practice.  The work she’s done is deep and useful, but my own explorations of this concept take me in a very different direction.

Caer acknowledges that devotion and worship are closely related words.  I’d add to that list: discipline, commitment, dedication, daily practice, reverence, piety, allegiance and loyalty.  All of these words have clear definitions and what I think of as fuzzy meanings.  They all come charged with our personal relationship with them in our daily lives, in our culture, and in our Spiritual practices.

I read a while back someone speaking about daily practice.  She said that the reason we give for not being successful is that we don’t have discipline.  She didn’t like that because discipline implies punishment.  She preferred the term devotion.  That resonated with me and got me started on this windy road. 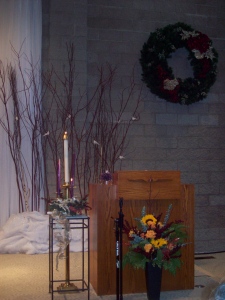 I was with my women’s group talking about a ritual we’re planning in February as we start a new series of ritual exploration.  I was referring to the group making a commitment.  They were offended, they’d already committed.  They were happy however to do a dedication.  There were no objections to the ritual planning, just the language.

Caer describes herself as an Urban Monastic.  In that context it makes sense that committing to a daily practice of ritual acts of worship is an appropriate expression of devotion, and an admirable one.    When the word devotion conjures up images of piety and reverence what we expect is exactly what Caer is doing.

For me the strongest association I have with the word devotion is affection.  When affection becomes ritualized it sometimes seems to lose its value, unless that ritualization is also reinforced with random acts of (you guessed it) devotion.   It is the paying attention and responding part of devotion that informs much of my spiritual practice.  Much more so than the daily worship or reverent action that make devotion easily identifiable.

For instance, supposing I saw healing as a spiritual calling.  Suppose I pursued this professionally and became a nurse.  What if I go to work everyday reaffirming that calling.   The reaffirmation – the ritual – isn’t the devotion.  It is the day-to-day practice of the profession, the act of following the calling and responding to need,  where the devotion is expressed.  My friend Donald at Walking in Beauty refers to this kind of responsiveness as meeting a “joyful obligation.”

another to guide souls into the afterlife.  Thinking about what might be effective or appropriate devotional practice for each kind of relationship you can guess they’d be very different.

The one whose devotional practice is going to be perceived as most pious is the one who is called to take care of Hecate directly.  This person is called to light the lantern and prepare offerings of food and drink every day.  Easy to spot the devotion there, but that does not necessarily make that person more devoted than any of the others. 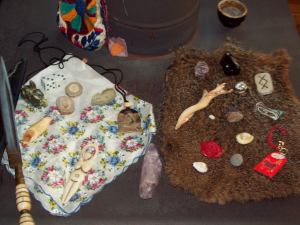 I was talking about this concept with a group of friends last week and another word got thrown into the mix.  Gratitude.  It is hard to be responsive when we’re not paying attention.  The practice of gratitude opens us up to the light and allows us to see in a different way.  It promotes that desire to give back, in reverence and devotion, celebrating the abundance in our lives.

Taking action on that thankfulness is an act of devotion.  Being committed, dedicated and loving is devotion.  Recognizing and responding to joyful obligations is devotion.  And yes, when you’ve dedicated yourself to working with a particular Deity, doing the research and following through with appropriate daily practice, as Caer described in her posts, is devotion.