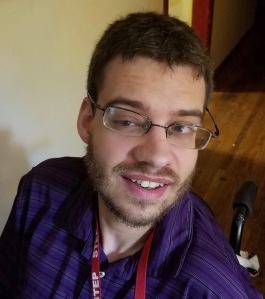 Orion – you should make this your new profile picture!

Everywhere Orion and I went this week it was busy.  Maybe it was my timing, but busier than what I usually find all the same.

I took Orion to get his haircut and we waited a good 1/2 hour on a walk in appointment.  Now, I could have “checked in on-line”.   I could have gone earlier in the afternoon.  I could have gone during the week and not on a weekend.  Sometimes I do.  Often I don’t.  This week, things were busy.

We went to the movies, afternoon matinee.   I was hoping for Christopher Robin thinking we might be hitting the “naptime” show.  Things never bode well when ALL the accessibility spots are filled.  When that happens I’ll often say, “forget it.”   But I really wanted to be out and about with Orion.  (Dinner at the theater rather than cooking was also a bonus feature.)

I didn’t get into the movie I wanted.  All the accessible seats were filled.  In a matinee for Christopher Robin!  I guess nostalgia goes a long way.  There was another movie on my list screening at the same time.  We snagged the some of the last seats for Mama Mia 2. 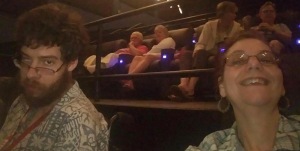 Even after the credits were over the theater was still busy.

Because we stood in line for food and read the tickets wrong about which theater we were going to, we missed some of the previews.  Not only that, there were people in our seats!  An elderly couple, who needed accessible seating and were hoping to sit together.  Guys…..

It all worked out, kindly and peaceably.   Minnesota nice does occasionally help.  The movie was not as much fun as the first, but still a summer romp.  We went home and listened to ABBA for the rest of the evening.

Even the grocery store (co-op) was busy.  There it wasn’t so much the volume of customers in the store. It was more the staff desperately trying to restock from what looked like hoards of shoppers we’d just missed.  Still managed to find what I was looking for, pretty fresh vegetables! 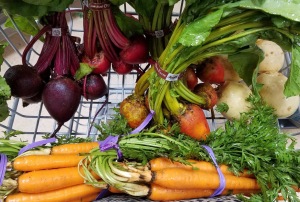 Hoping Karina cooks up a lovely dinner for me with these!

I guess I just wanted to be a grasshopper this week and everyone else decided to be ants.  busy busy.